This was a large farm, and is one of the more prominent and well-known ruins on the moors.  It’s name still features on maps today, even though there is precious little of the buildings remaining.  It was known also as Old Racket’s in the early days. 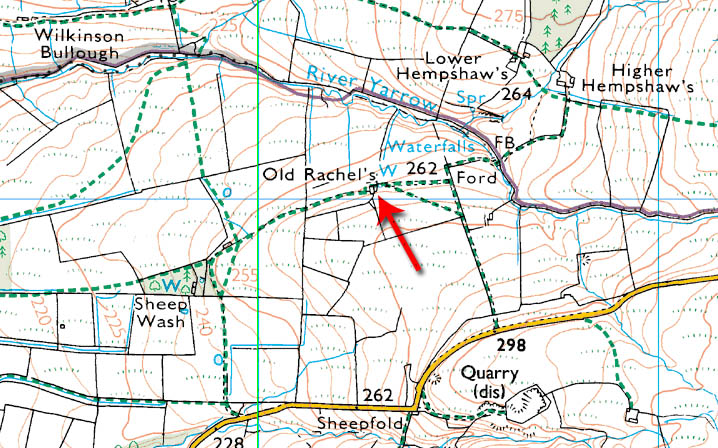 Possibly the most enigmatic ruins of the moors, with plenty of evidence but tantalisingly little about Rachel.

It is thought that Old Rachel was regarded as a bogeywoman in days past. She was a bit of a recluse and people tended to shy away from her.  If children misbehaved they were threatened that Old Rachel would get them!

Old Rachel’s on first edition OS mapping – North Up as would be expected.

Roger Brownlow is the first name I can track down to have occupied Old Rachel’s Farm.  He was the church warden – presumably of Rivington – and lived here in 1841, aged circa 55, with his sons, James and Robert both circa 15 years of age.

The farm had a large stone water trough which was filled with cool, clean spring water, and the doorstep was made from an old cheese press.  Behind the farm was a bowling green, and further back still – towards Hempshaw’s we believe – was a mock orange tree amongst old gardens.

If you walk past Old Rachel’s on the track, with the ruin on your left, there is said to be a square pool which was used for dipping sheep – it may still be used for this purpose.

The Evans family were the last inhabitants of the farm, known to be present in the 1890’s.  Some time soon after, they moved to Higher Knowle Farm, and thus Old Rachel’s fell into ruin. 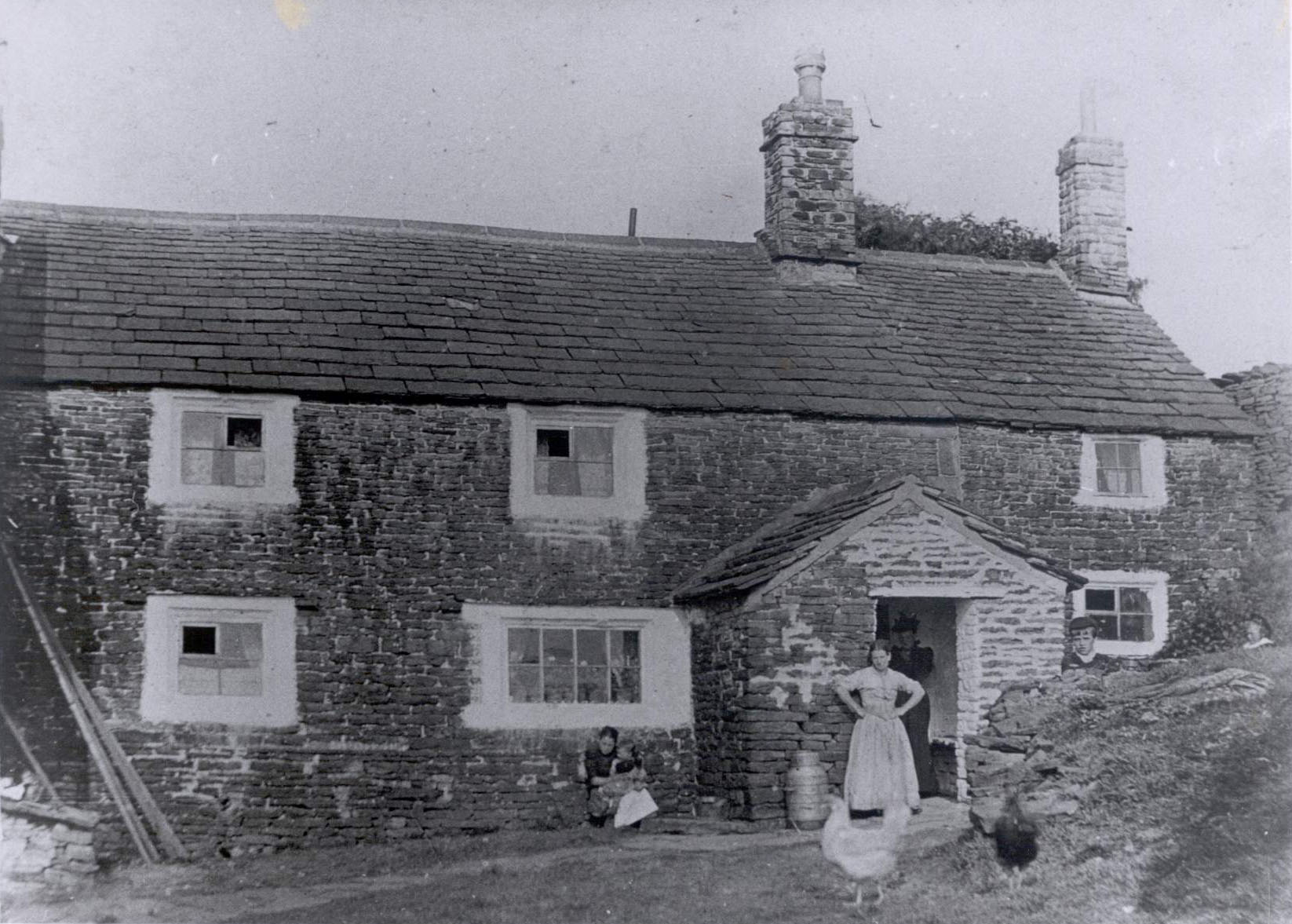 You can see in the photograph above that there was significant repair work undertaken to the porch, which contained seating.  To the left of the house is a large barn.

Looking at church records, walking around the gravestones, and reading old news articles, I have come to the following conclusion. 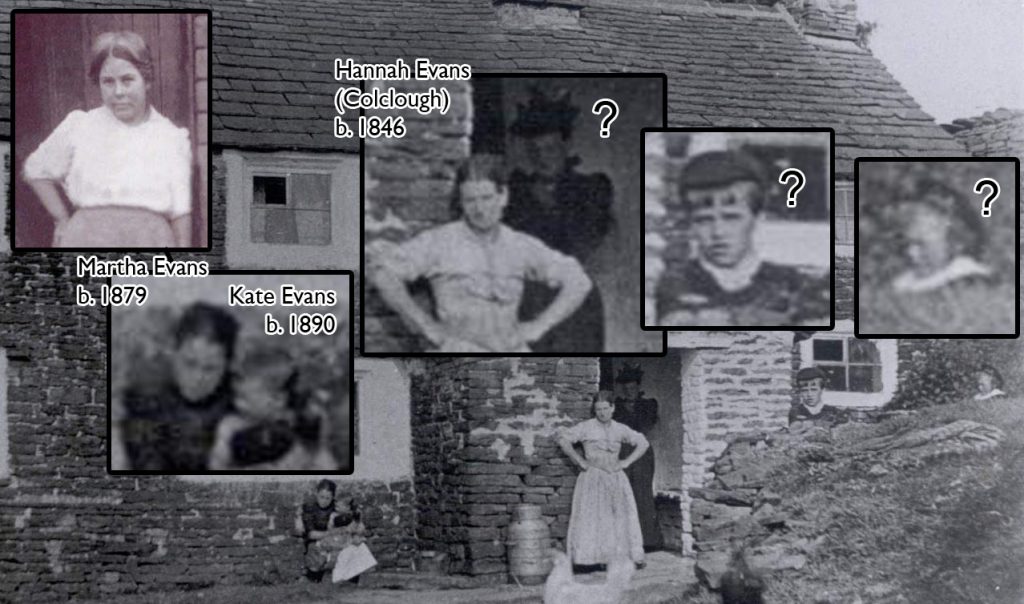 Hannah giving birth to Kate at the age of 44 may seem unusual, but these dates are backed up by the gravestone which can be found in Rivington Parish Church:

The Evans family grave is on the left hand side of the graveyard, about half-way between the lych gate and the church itself

The grave is quite easy to find, and overlooks the bowling green.

Henry was born in 1840, and Hannah was born six years later.

Henry was quite the character.  He lived at Hill Top Farm with his father in 1891, and moved to Old Rachel’s shortly after.  In the Horwich Chronicle, 5th February 1898, was the following:

Notice: I, Henry Evans of Old Rachel’s Farm, Rivington, will not be responsible for any debts of my wife Hannah Evans.

Henry wrote a letter on 29th January 1916, which shows him as a major landowner at this time.

I give you notice for Old Rachel’s, Stoops, Old Knowles and Higher House lands as we want the Rent Reduced on that Piece of Land against the Bungalow add to.

On 1st August, 1925, there was a severe storm where lightning came down the chimney of Higher Knowle(s) Farm where Henry was living at the time.  The lightning killed a dog lying on the hearth, and deafened Henry, who was standing nearby, for some time, and narrowly escaped more serious injury.  The fireplace was knocked down and plaster stripped off the parlour walls.  A hole was knocked in the wall between this room and the dairy.  Coping stones were dislodged from the roof and paving stones lifted in the yard.  Many panes of glass in the windows were broken and also glass in the picture frames on the walls.

Whilst the date of Henry’s death is not certain, he was believed to be alive in 1927, due to the following story:

The Chorley Guardian reported on 18th February 1927 that Henry Evans, now of Higher Knowle Farm, was fined for allowing sheep with “scab” to escape following a detention order.  The defendant was said to be 83 at the time, and was fined 10 shillings.  According to the census, Henry would have been 86-87, but it is likely to be the same gentleman.

One of Henry and Hannah’s descendants was a Joseph Evans.  In 1937 it was reported that Joseph, of Higher Knowle Farm, had married Sarah Jane Evans two years earlier but they had still not lived together, and she remained a cook off Winter Hey Lane, Horwich.

It is not sure exactly when they vacated the property, but we do know that The Horwich Chronicle reported on the 22nd February 1902:

Twelve months notice to quit served of several farms in the Park area of Rivington.  Liverpool want to acquire the whole of Rivington, Anglezarke and part of Belmont.  There is a lot of opposition.  The church, chapel, school and chapel school are exempted form the Liverpool plans.

In 1907 they were still referred to as Martha and Abel of Old Rachel’s.  They were in the news this year, when they had an accident on Dryfield Lane.  They were in a horse and cart, and a car came round the corner and frightened the horse.  Abel was thrown out but did not sustain any broken bones.  As mentioned, Kitty died whilst they were still at Old Rachel’s, in 1909, but by the 1911 census, they had moved to Moses Cocker’s Farm.  You can trace part of the family tree here – press CTRL+F and search for “Martha Evans” in the document.

Martha Evans on the right – she moved out of Old Rachel’s Farm and in to Moses Cocker’s with Abel Pilkington.

The ruins of Old Rachel’s were only partly standing in October 1936.  There was a large open fireplace with inglenooks.    In the photograph below, the hill rises left to right, confirming that the front of the house was looking over Rivington and indeed Chorley.

Dr. Edmond Wright wrote a series of poems called The Horwich Hennets, and one of them was titled Old Rachel’s:

Over heather that buzzed, stepped out of the cold
wind and sat down on the fallen stones. No roof —
the grey sky and the rains and the frosts and old
snowfalls, the rotting of timbers, had left stone
like the bones of the farmhouse, the only proof
lasting till then of the lives that in this lone
moorland dell had once laboured up there. They were
bones in some graveyard, bones that had obeyed
them as willing as horses. The only stir
now was the nodding of bog-cotton. Afraid
of the ghosts where the bleating of a sheep could
only be from the past, I ran to the wood.

But who was Old Rachel…?