There are quite a few ruins where I have some information, but not enough to yet warrant a dedicated page.  I’m constantly trawling through reference works, and intend to create full pages for these in due course – if there is sufficient information out there.  Anyway, these have been in “draft” status for a couple of years now, so I’ve decided to compile them into a single “Unfinished” page for now.  Any further information gratefully received!

According to the Anglezarke Sources Book in Chorley Library, it was common for the farmers to have another occupation.  The wives and daughters often worked on the looms.  In 1821, the tenant of Drinkwaters sent a consignment of barytes illegally to France.  Barytes were used in the bleaching process of paper processing.  The profit was a whole £5.

George Dixon lived for some time at Manor House Farm.  He was the Rural District Councillor and during lambing time he used to sleep at Drinkwater’s.  Along with other abandoned farms, it was used as bombing target practice for war preparation. 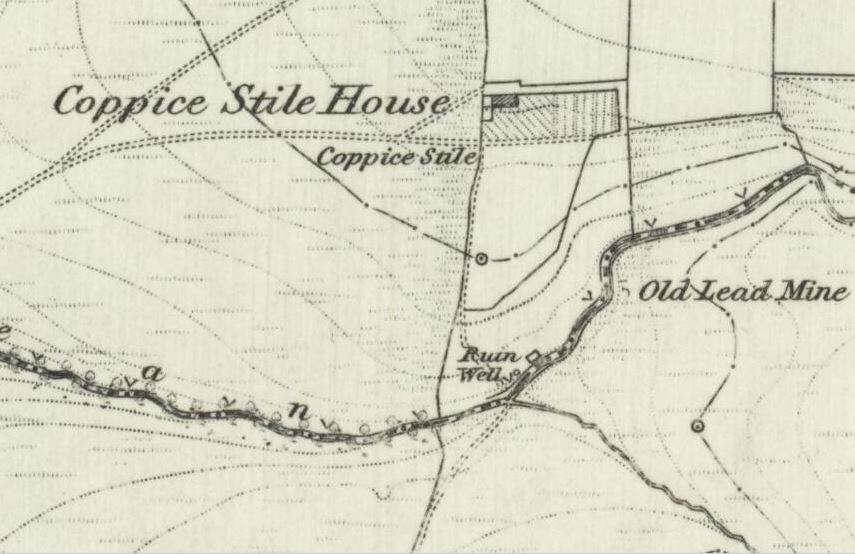 Coppice Stile House is a often-visited spot on the way up to the summit of Great Hill, when starting from White Coppice.  Follow the dry stone wall down to Black Brook and there is the remnants of another unnamed run here, too.  Here, Black Brook is referred to as Dean Black Brook, and Grange Water further upstream.

Some called this farm “Copy Stile”, with White Coppice being “White Copy” and Black Coppice being “Black Copy”.  Surprisingly, this used to be a pub, although I don’t know by what name.  Perhaps this was up on the hills so as to be far away from Alfred Ephraim Eccles, who was the White Coppice mill owner and a rabid advocate of the temperance movement!

Alance Bridge is the spot on modern maps at the confluence of Limestone Clough and the River Yarrow at the inlet to Yarrow Reservoir.  Before the reservoirs, the river was still here, of course, and a bridge was still needed.  The current bridge replaced an older bridge that was a short distance further west, which was demolished with this, Alance, farm, Turner’s Farm and Anderton’s Farm during the construction of Yarrow Reservoir.  In George Birtill’s excellent Heather in my Hat book, he says that the old bridge can be seen along with part of the old road. 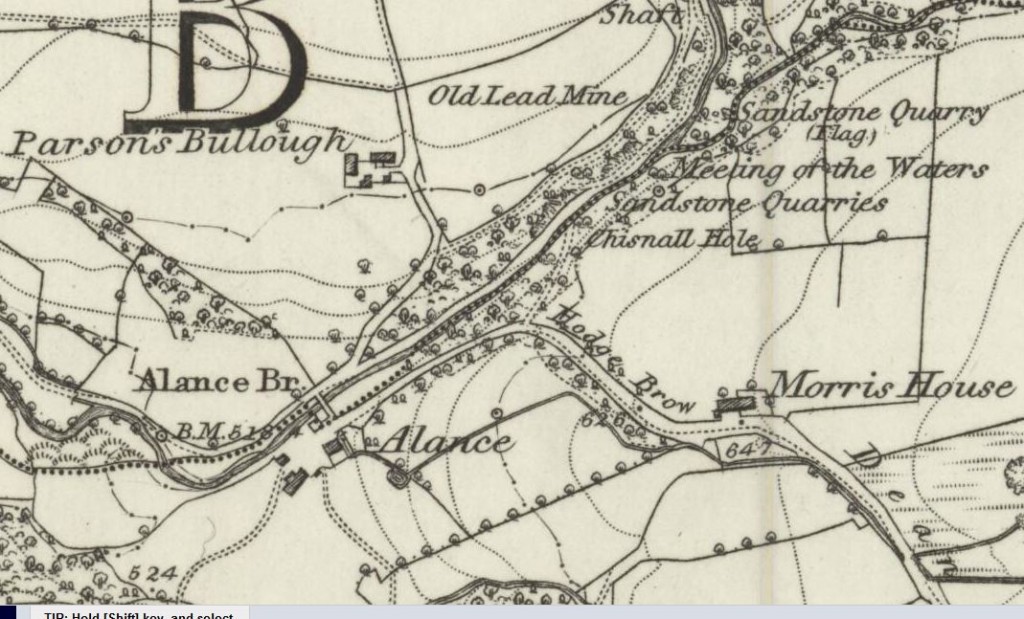 I have information stating “At first the reservoir was only quite small as the Yarrow was dammed where the tall embankment is near the fingerpost. The hill which formed one end of the dam can be clearly seen across the water. In 1868 a bigger embankment, 103 feet high, was built in the original gap, and additional ones on the other side of the hill. This is when the new bridge was built.”  I’m trying to get my head round that, I must admit.

The Lancashire OnLine Parish website states that for 1841, residents were:

Rawlinsons book tells us that Alance bridge is named after a family of that name who had a farm on the Rivington side of the bridge on the reservoir side of the road. In the Hearth Tax returns for Rivington during the year 1663 Thomas Alance paid two shillings for one hearth.

On 15th January, 1895, the Horwich Chronicle reported the sale of the property.  Richard Shaw of Rivington paid £ 410 for “Equal undivided third part or share of the messuage and dwelling house called ‘The Pilkington’s’, Rivington, and the land occupied therewith”.

The Chronicle reported on 9th July, 1904, that Liverpool City Council had decided to buy Pilkington’s, along with Jepson’s Farm.

A great article is here http://www.chorleyhistorysociety.co.uk/articles_01/haddock_fold_01.htm

On 20th October, 1894, the Horwich Chronicle reported that a robbery had taken place at Morris House Farm, the house of Mr. and Mrs. John Taylor, during the night.  Some silver was taken and the thieves helped themselves to bread, butter and cream.

The house had gone not long after the turn of the century.  I have not yet uncovered any thorough evidence of the original farmholders although there was a an Obadiah Morris of Anglezark in the 18th Century.