Turners Farm was swallowed up by Yarrow Reservoir.  It only survives now in name, as the Southern end of the reservoir is known as Turner’s Embankment. 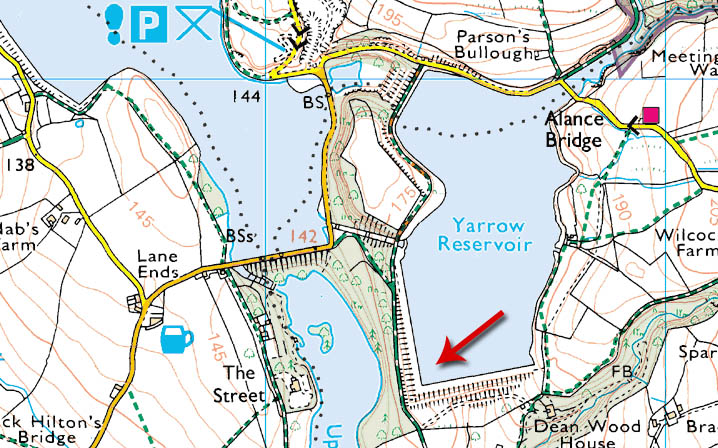 Thankfully, old mapping still exists, without which we would have precious little evidence of former times.

Note the changing punctuation in the name.  Apostrophe use was even more inconsistent then than now!

There is plenty to digest here.

This area has a history of leather working.  A Tam Pit is a method of tanning hides to make leather, and in the Autumn of 1874, workmen for the Liverpool Corporation were removing earth and came across a succession of these pits.

They were all flagged in the bottom, and were 5′ x 4.5′ x 5′ deep.  The timber appeared to be connected with wooden pegs, and there was sediment including bark, lime, hair and crockery.

To the East of Turners Farm you can see below a long field along side the wood (Dean Wood).  This field was called Booth Bank, and at the lower end of this field (underneath the “e” of Turners) could be found a wall foundation, which may have been part of an associated shed.

Even the occupants of 1874 were unaware of these pits being worked, but there was a link to the pasts here when it was customary for the farmers of that day to tan their hides – and those, perhaps, of their neighbours – before selling them to market.  It was a long and tedious process, hence the work being communal.

Not far from this spot, it was reported that by the Yarrow (though I would say Dean Brook) was a beaten circular track about 6 or 7 metres in diameter.  This was where the bark was crushed, and was often referred to as a “cock pit”.

The name Booth Bank indicates the possible existence of a shed.  A member of the Nightingale family previously was known to have worked as a blacksmith not far from Morris House.  This could be linked to the tanning, perhaps.

Turners, like Alance, is completely engulfed by Yarrow Reservoir, the border of which is added above to the old mapping for information.

There are lots of tales about the nearby Dean Wood, which I will split into a new article in due course.  A Mrs. Swithells of Dean Wood complained about the state of the steps and footpaths in the woods, and £4-6s-6d was spent repairing them in early 1898.  In 1902, she opened the grounds of the house, and placed collecting boxes for donations, all of which went to local charities.  However, only three years later, the woods were closed by their new owners, the Liverpool Corporation.

In Thomas Hampson’s History of Rivington, 1893, is a poem about the wood:

Sweet Valley of Dean, where the fairy is sleeping,
In softest repose by the side of the stream,
Which falls from the rock where the siren is peeping,
And lulls the soft echo, who laughs in her dream.

The book also mentions “Sol as Monarch marches triumphantly through the air”.  No, I’ve not got a clue, either.

The property in Dean Wood suffered a fire in August 1931.  Mr. and Mr.s H. Farmer and their four children lived here, and a Mr. Shawcross helped douse the flames.  Thankfully it was put out sufficiently, as it is still a posh dwelling to this day!

The Anglezarke Recreation Studies, which came before the West Pennine Moors Action Plans, refer to Dean Wood as an area requiring the maximum possible amount of preservation possible.  It is described as “a fine, undisturbed oakwood, probably the most interesting piece of oakwood in the region, and is currently the only known nesting site for the Pied Flycatcher in Lancashire”.