There is not much left of this old farm nowadays, but there is evidence of TWO farms here. This area once had an abundance of farms but even the ruins are disappearing as the stone is used for road building and other purposes. 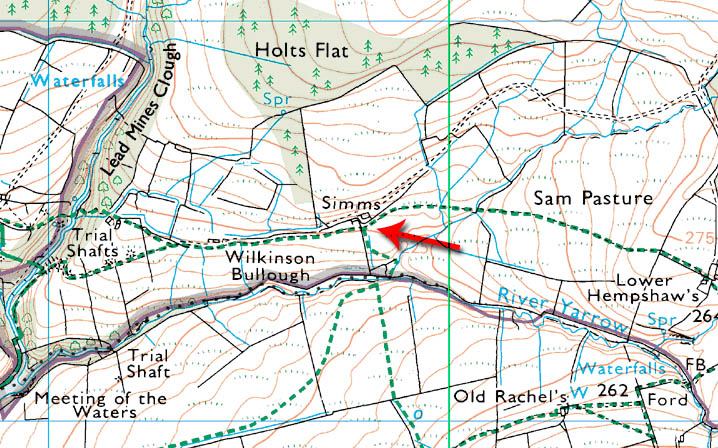 Probably the most remote of all the ruins, and a prime spot for Wheatear, Curlew and Stonechat.

A friend remembers seeing Simms’s in the mid-90’s when there were still openings for windows and doors but you have to delve further to uncover the secrets.

Simms, twice.  The lower spot, marked simply “Ruin”, is an area I have always called Giant’s Stile Farm, and was the site of the original Simms until around 1820 when the tenant decided to move northward to the “current” location.

The Pilkington family, who had links to most of the farms on the moors, are known to have branches of the family that lived here.  Samuel Pilkington was born here on 2nd March, 1809, and was christened on 13th June of the same year at Rivington Unitarian Church.  He married on the 18th January, 1847, and died in 1887, being buried at the Parish Church.  I can’t yet find the name of his wife, whom he outlived, but they had a son, Thomas, 1844-1897. 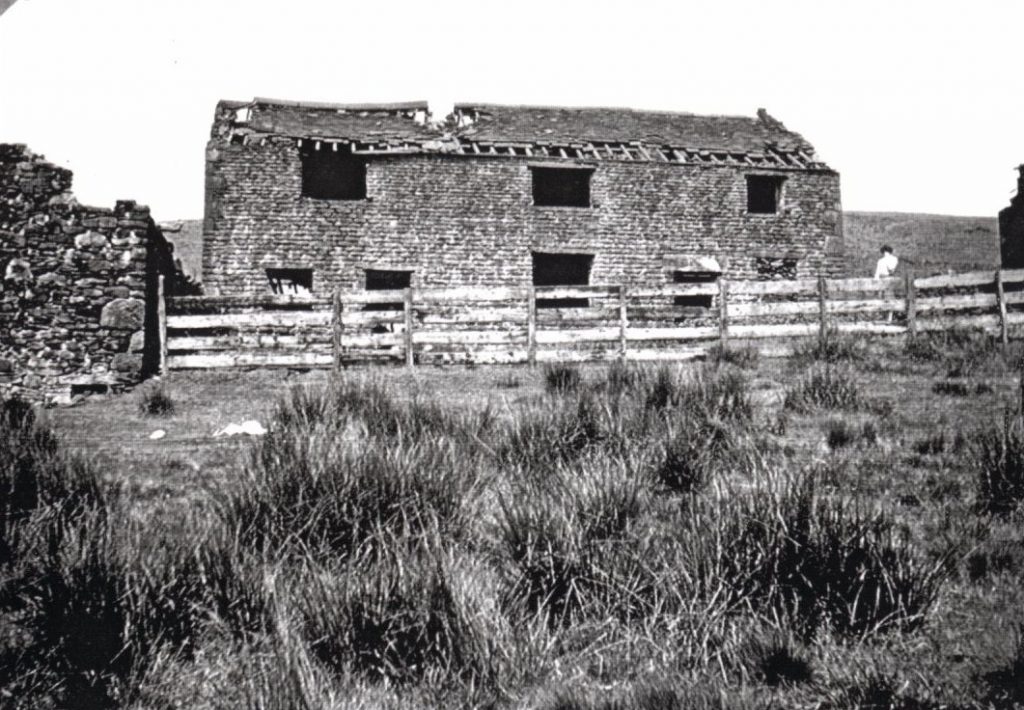 How many of these lines can be traced on the ground now?

The 1841 census lists the following inhabitants of Simms – be it Simms of Anglezarke or a farm of the same name in Rivington: 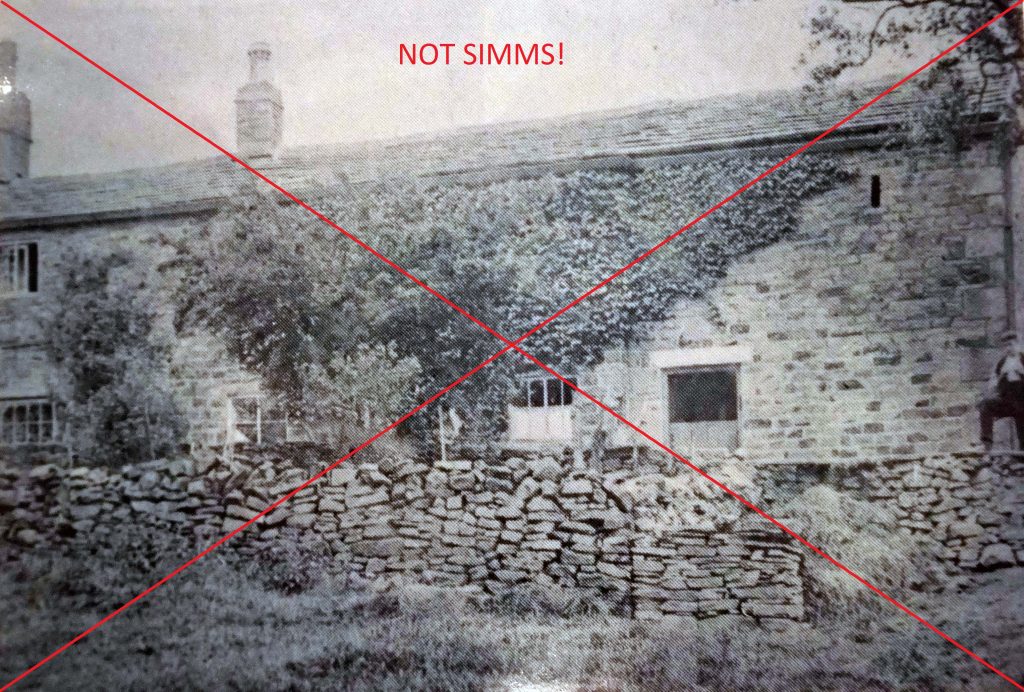 This is NOT Simms in Anglezarke, but nearby Simms in Rivington

When Rivington Waterworks was constructed in the 1850’s it became the policy of successive landlords to reduce the number of buildings in the water collecting grounds in order to prevent pollution of the water supply and perhaps this is what happened here.  George Birtill’s 1972 book, The Hiker’s Book Of Rivington, says that the ruined farm is unmistakable for its size. 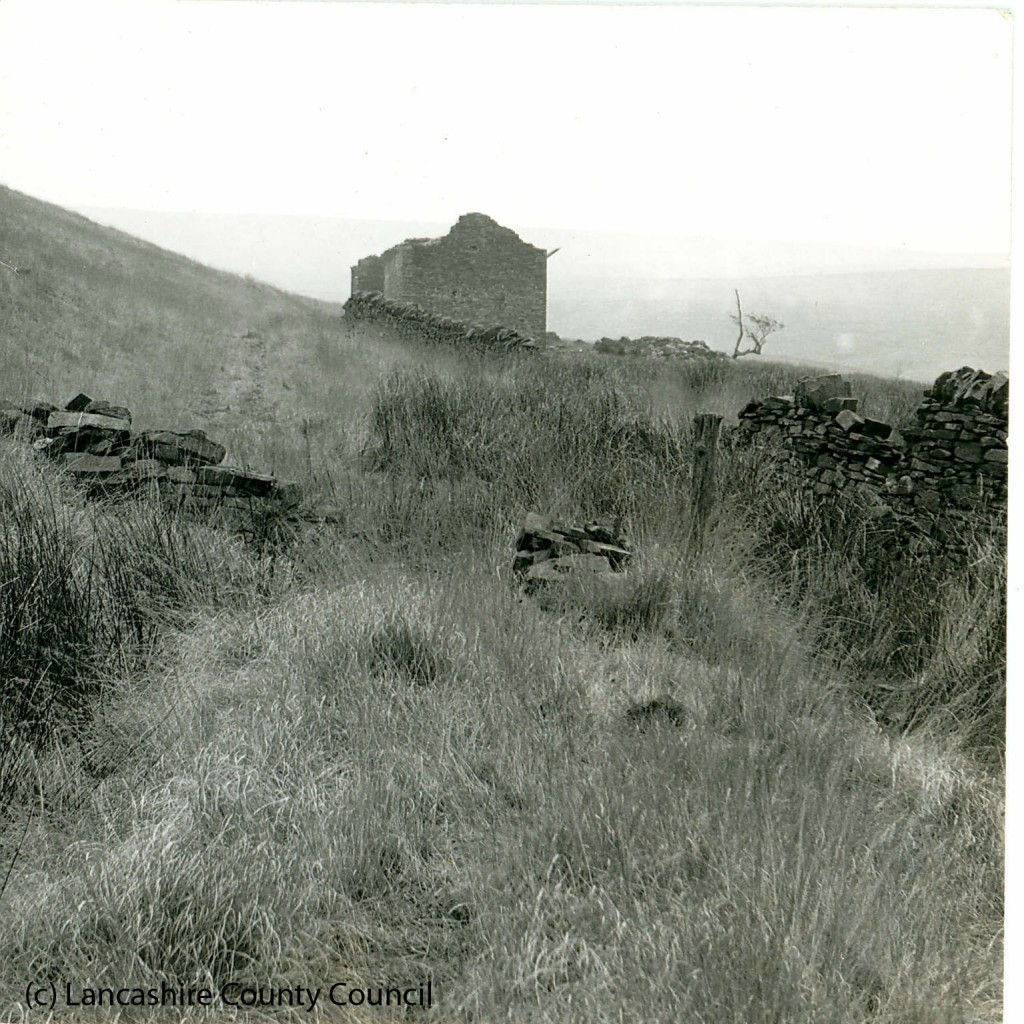 The ruins of Simms when there was still something to see.

The names Jepson, Ward, Gill and Simm were tenants of Anglezarke as far back as 1595, and some of these names go back even further.  Simm is believed to be a shortened form of Simson, although George Birtill in his book Heather In My Hat suggests that Simms = Son of Simon, possibly Simon De Knoll who was an early freeholder in Anglezarke.

This is an area known for having open ditches across the moorland, rather than the more modern tile ditches which came to replace them. 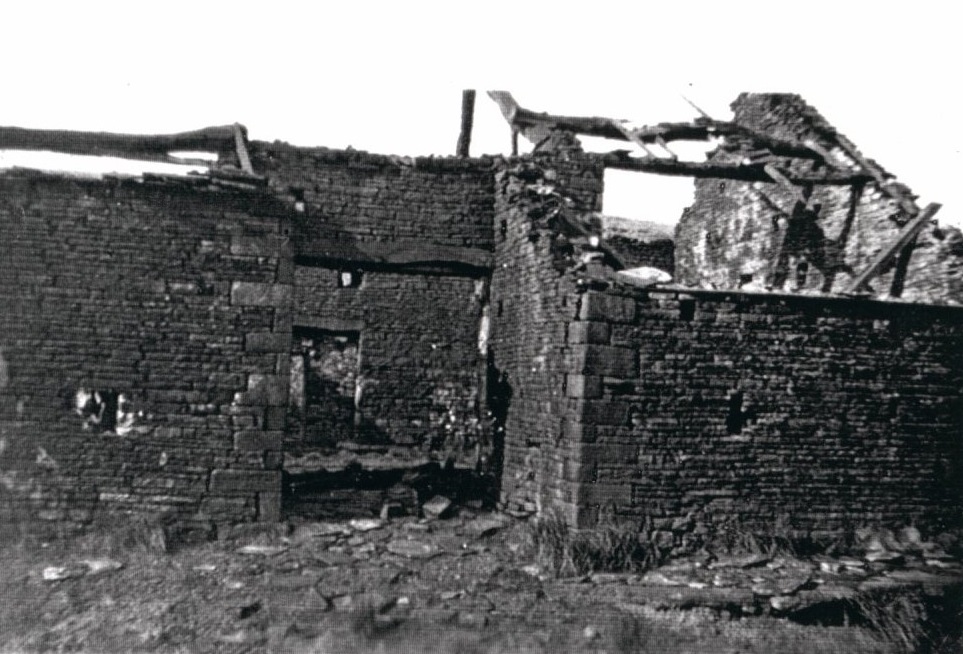 A scrapbook photo that was kindly sent to me

The farm of Simms at this time was a short distance south of this spot – alongside the River Yarrow.  This is the spot I call Giant’s Stile Farm, and I was delighted to discover it was the old Simms Farm location.

The barn here was an old threshing barn, which gives evidence of enclosure farming before extensive ploughing had ceased around 1730-50. 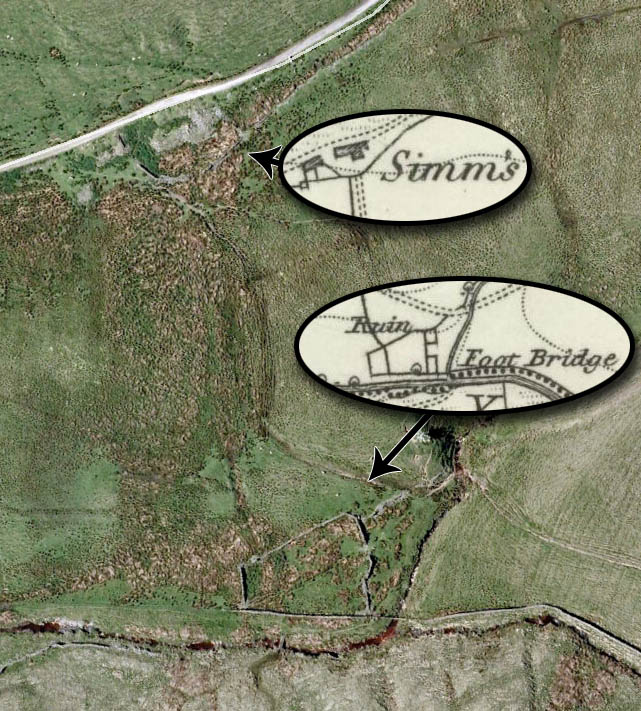 Simm’s as shown on OS mapping in its later location, and also discovered as the unmarked ruin near the river bank. Perhaps the older ruin is in better condition due to it disappearing from mapping?

The farm of Simms was rebuilt in its “current” location in 1820 at the request of the tenant.  The land here is reckoned to be more fertile, as it is away from the wide “tongue” of gently sloping land which separates this location from the Hempshaw’s.  Whilst it was undoubtedly moist around here, I suspect it may have lacked nutrients and light. 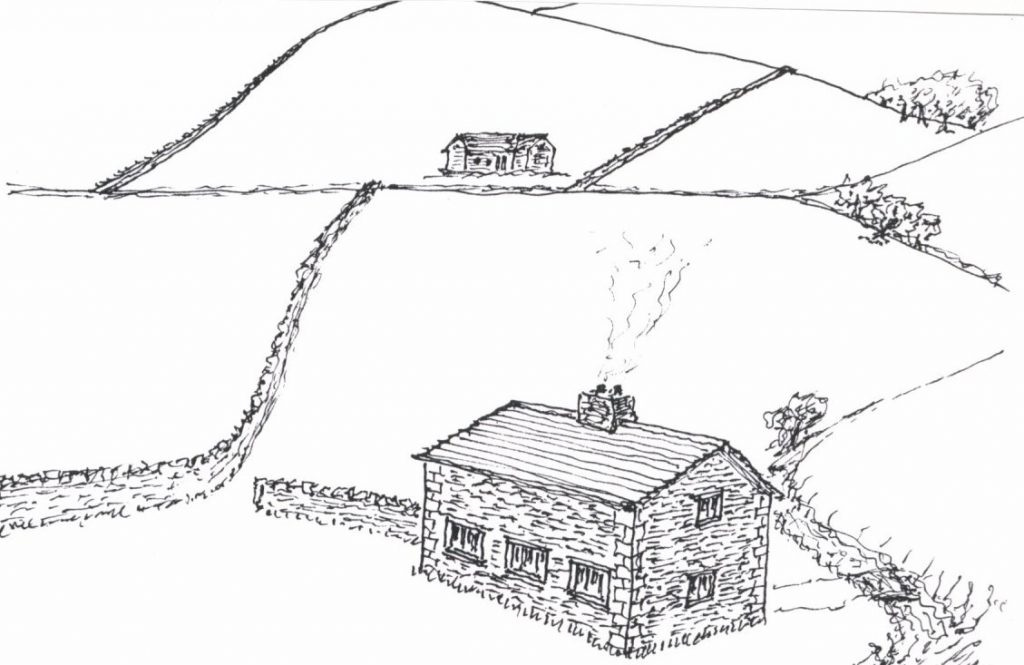 DA Owen’s sketch of the farm

The Hempshaws joined SImms by 1897, with an overall farmed acreage of 267.

Richard Skelton mentions in his book, Landings, that there is an unnamed and tattered book in Bolton Library that says there was a date stone on the farm of 1649.  There is a description of a sketch from the tattered book – I will try and ask Bolton Library if I can get a scan of it.

The construction was said to include an unusual form of roof truss, where the beam rests on the walls of the barn, and the roof is made of stone slabs.

In 1851, the census confirms that this farm had a shepherd – as did Brook House and Higher Hempshaws.  Ten years later, Simms along with Brook House, Lower Hempshaws, Parsons Bullough and High Bullough, all employed the farmer’s son as the shepherd.  Apart from sheep, there were a few stirks (young calves) generally kept.

You might notice an area on the maps around here called Sam Pasture.  This was known previously as Sim Pasture, and also Simms Pasture, which explains its obvious ties to the tenement.  The pasture was the common hay meadow for all the farms in the Helmshaw area of the moors – certainly including Hempshaw’s and probably Old Rachels, Wilkinson Bullough, Abbot’s and Old Brooks.  These farms generally shared the characteristic of having a dry earth closet, and bucketed water from the nearest stream.

In the late 1800’s the men mainly worked in the mills of Adlington and Belmont, and farming was but a subsidiary income source.